My first two weeks at DP

I just completed my first 2 weeks here at DP. For those who don’t know what I do here: 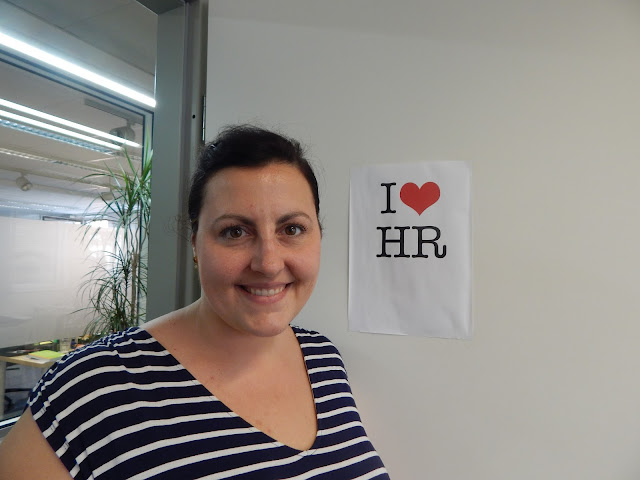 During my first days here I already met a great number of people (some may call it a meeting-marathon) and I am eager to learn and remember everyone’s name!

You guys are very open, enthusiastic and supportive and I feel very welcome here at DP. So many thanks for sharing your knowledge, ideas and helpful information. I’m really looking forward to working together with you!

Julia
Posted by DigitalPerformance at 7:15 AM No comments:


Last Thursday (July 2nd) the two teams TV/Social & SEO merged for their team event due to the small amount of team members and, of course, the already perfect vibe within those departments :-) 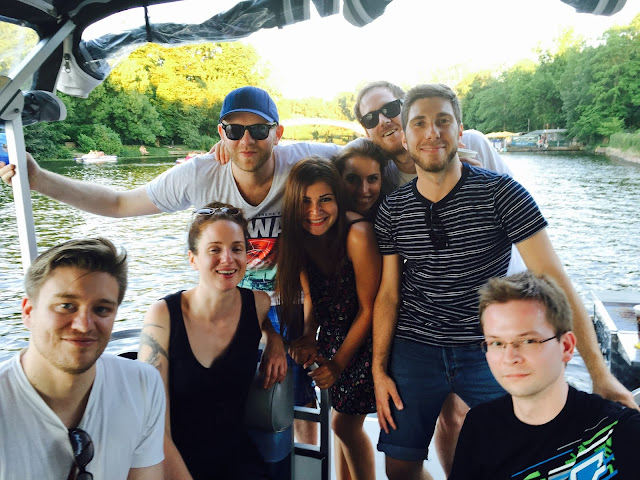 To even strengthen the “relationship” we spent this super hot day (32 degrees!) on a boat. A Spreeboot (http://www.spreeboote.de ) was rented for three hours and we were comfortably shipped through the Landwehrkanal by our female skipper who wore leather hot pants, that were even hotter than the day itself (sorry no photos). 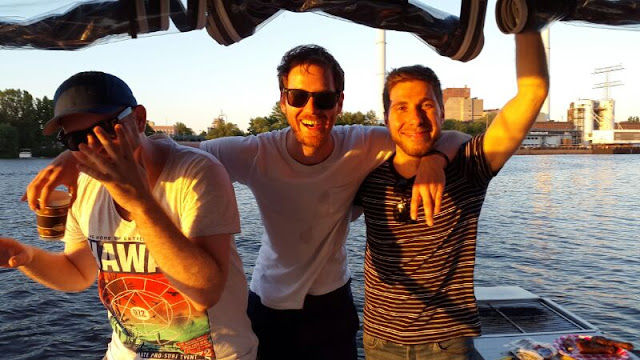 To put a cherry on the ice, we were able to throw some meat and vegetables on the grill and enjoy a whole “Fass” of beer. Music was also provided, ranging from Helene Fischer to Haftbefehl. 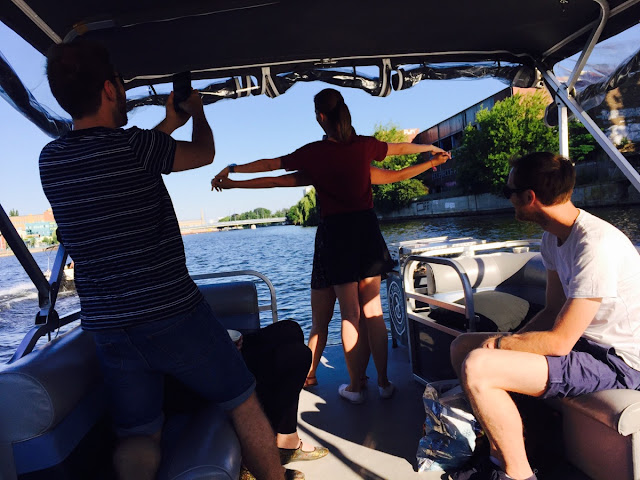 We had a wonderful, relaxed time and really recommend a tour like this on a hot summer day. Clearly another benefit of working for DP!
Posted by DigitalPerformance at 7:39 AM No comments:


And so “The Team” came together. Unofficially already started in January where we played some matches against other teams on a 10 minute base. This formed the core of what would become “The Team”. We signed up later for the Urban Sports League, the real thing. We were hyped, we were psyched. We we’re going to do this and we were going to do this good! The team consists of Markus, Jonathan, Daniel, Uwe, Alex, Jani, Fran, Oli, Ruben and Tom (with later additions in the form of Nico and Ignacio).
A flaming start of the Digital Performance crew stopped the Kayak Locomotive dead in its tracks. This would be the basis of something great. In a forty minute match 29 goals were scored ending the match in 24:5 to our advantage. Already DP was distinguishing themselves by scoring so many goals.
However, the next week spoiled the fun. Home24 showed us we should not become overconfident and this was just the start of the league. Being a bit unlucky with referee decisions but also some seriously bad play made the match end in 5:9. Our team, the Spanish fury, combined with some German no-nonsense “Gründlichkeit” and a hint of Dutch and Serbian flavor was now down on the ground again, with lots of work to do for the coming match.
The week after Vistaprint was the next victim. But the only thing they saw at the end is that the score form had 12:3 printed on it; again in favor of DP. We were on a roll again!
So KABAM was up next, which ended in a tough fight between the two teams. Some lucky decisions by the referee gave us the benefit to start scoring goals which in the end would make the difference. The game ended 11:9 and we were back in the league. However the week after would be the toughest match so far and a game for the league place number 1: Crobo. 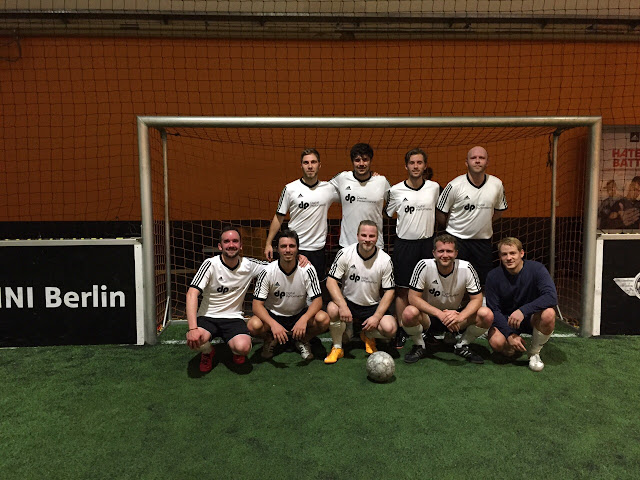 Crobo had been winning all of their games so far and were proud leaders with 12 points. Our job was to do something about it. And that we did.
Fran, Jani, Jonathan, Ruben, Alex and Tom were up to the job to beat Crobo. A quick lead erupted as our top scorer Alex broke the deadlock. An unlucky 2 minutes later the scores were even again as goalie Tom was surprised by a powerful shot in the top corner. DP was not broken and pulled away to 2:1, but again Crobo was taking advantage of our sloppy defending: 2:2.
Again we displayed some dynamic power and showed them who was boss. We put some distance between us and were a 6:2, while Crobo had nothing to do against it for about 10-15 minutes. We were getting tired of all that ass-kicking so Crobo had a chance to fight back and came closer again. Luckily our awesome strikers never failed to score, so the result was never endangered. We won the game: 13:7.
For the first time we were seriously number one in the league. Our strengths were to seriously score many goals as we have goal machines in the form of Alex and Ruben.
With full hopes when looking to the schedule that was still ahead, we were on the way to become champions in our first season of the Urban Sports League. So next week we were up to the Max Delbrück Center.
We played a horrible game and were almost taken by surprise by their enthusiasm. When they attacked, they attacked with 4 people, whereas our tactics were still to keep only 2 defending (as everyone played like this). We conceived a lot of unnecessary goals, but still our goal machine was working; even under pressure and bad performance: 14:8
With some fresh new addition in the form of our Argentinian Ignacio the DP team was expanding as we were playing the big guys from Rakuten. A physical game left DP with empty hands as the Rakuten force proved to be the decisive push towards our loss. A small setback, but we kept going.
Soundcloud was coming up next and our strikers were letting them hear the sound of a ball hitting the net a mere 16 times, whereas Soundcloud scored 8 goals. Due to our loss the previous week and good performance by our direct competition our league was becoming very exciting again with all to play for as now 4 teams were having 18 points! Crobo, Rakuten, Game Genetics and we as DP were number 1, where DP was number 1 by goals scored. 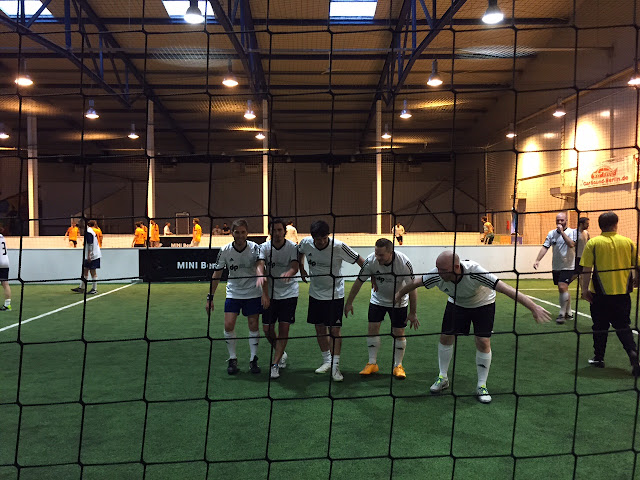 Our final game against Game Genetics would be decisive for the outcome of the league. All we had to do was win, a loss or draw would have dramatic consequences.
The team had grown again with our new Rico guy over the last week and we were about 10 people this week. Enough to have the team rotating a lot, with only goalie Tom staying in place. Furthermore we had brought our supporters and 1 British hooligan (thanks guys!). The game quickly erupted with our Spanish samba in front of the goal and within the blink of an eye we were 2:0 up.
A quick moment of bad concentration brought their tall striker face to face with Tom and the striker passed with a very well placed shot in the far corner. 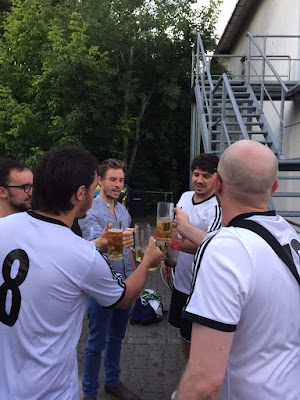 GG was on the long run not a real threat anymore as our passes and goals were getting more and more incredible and the well-oiled machine was running on full revs! GameGenetics was capable of pinching us some salt in the eyes every now and then, but for every goal they scored, we scored three in return.
In the end a small situation turned explosive as goalie Tom was (almost) hit in the face by their striker, who threatened to get physical. We have our Spanish influences for the goals, but our German influences for the raw power; as Markus stood up for Tom and joined the fierce discussion with the GG players. The referee had seen enough and stopped the game ending at 19:6. The Digital Performance crew was now CHAMPION of the Urban Sport League Mixed 2015! 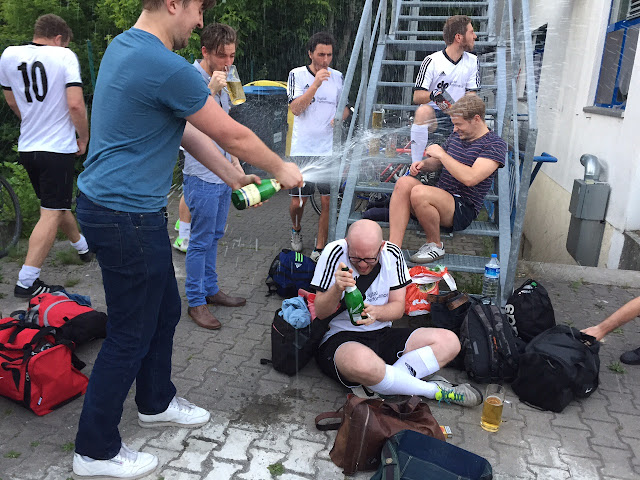 Just imagine, we are a lot of guys coming from very different backgrounds and countries and are working in departments that might not even have so much to do with each other. Yet, our football crew has shown that once a team comes together we can turn into a mean Digital Performing football machine!
Posted by DigitalPerformance at 9:00 AM No comments: